How to Establish Correct Leadership Over a Dog .

Often the root of the behavior problems is a lack of leadership, trust or respect. Whether treating separation anxiety, fear aggression, or general unruly behavior in dogs, virtually all veterinary behaviorists, applied animal behaviorists, and dog trainers agree that the solution to better behavior involves teaching the owner to be predictable and trustworthy—in essence, to be a good leader. But does learning to be the leader mean that owners must dominate their dogs?

Twenty to 30 years ago, social dominance theory and ideas about wolf behavior in the wild guided dog-training methods, which focused on punishing bad behaviors by using choke chains, pinch collars, and electronic collars because wolves in the wild appeared to gain higher rank through force. Since then, the understanding of dog behavior in relation to wolf behavior has become clearer, and the science of learning has improved our understanding of why animals behave as they do and how their behaviors can be modified. This article discusses traditional training methods based on dominance theory and some of the associated misconceptions, defines dominance and explains why dog behavior should not be based on wolf behavior or animal dominance models, clarifies the difference between leadership and dominance, and shows how leadership can be achieved (even with aggressive dogs) using non confrontational methods.

The progression of force dog Training was the general recommendation for all dogs that defied their owners or showed aggression, regardless of the cause. If a dog was possessive of food or a toy, owners were told to use a choke chain or pinch or electric collar correction. If a dog growled at another dog, even out of fear, owners were told to correct it. Everything was about forcing the dog to submit to the owner rather than changing the underlying emotional state that drove the behavior. 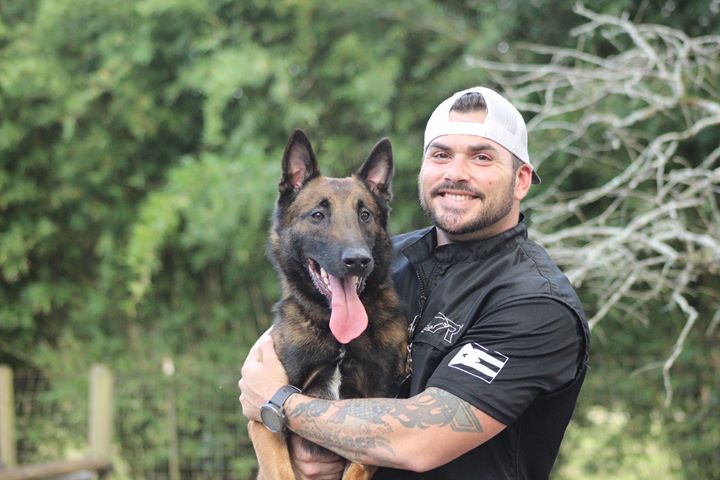 Now a days if I look back the old training techniques seem crude and barbaric. However, at the time, they seemed reasonable. It made sense that because dogs are descended from wolves, we should model our training techniques after what the alpha wolf would do. Although this reasoning seems logical and associated techniques are still commonly advocated among traditional dog trainers, there are many problems with this approach

There are several problems with the wolf model used by traditional dog trainers. Just as humans are not chimpanzees, dogs are not wolves. Dogs became domesticated over thousands of years through a process called self-domestication. When humans started settling in villages 15,000 years ago, they accumulated trash in dumpsites. Wolves that were genetically less fearful than their counterparts made use of this new food source. Less fearful wolves could scavenge from the dumpsites, whereas their more fearful con-specifics would flee when humans appeared, even if they were miles away. Wolves that had a shorter flight distance (that could tolerate humans being closer) survived better in close proximity to humans than did more fearful wolves. Their offspring inherited this lower level of fear. Over many generations, these dumpsite scavengers developed into a distinct population of dogs that were genetically tamer and more adapted to living near humans than wolves.

Because of their nature as social pack animals, dogs want us to tell them what they’re supposed to do. Their goal is to help the pack survive, and they do it by following the pack leader. It’s the job of the pack leaders to provide protection and direction. Establishing and enforcing rules, boundaries, and limitations is how they provide direction to the pack.

Rules refer to what a dog is and isn’t allowed to do: Stay off of my bed but sleep on yours; don’t jump on people; don’t pull on the walk.

Boundaries control where a dog can and can’t go: The baby’s room is off-limits; don’t go out the door until I say so; you can only enter my personal space when I invite you.

Boundaries are about claiming territory, and they teach your dog what is and isn’t his.

Limitations control the length or intensity of an activity: We stop playing fetch when I say so; you’re too excited, so it’s time to return to a calm and submissive state with a timeout.

Rules, boundaries and limitations can keep a dog from misbehaving because they give her something else to do. For example, if your dog has separation anxiety, create a rule that she has to lie on her bed when you’re getting ready to leave. This will keep her from becoming excited because she associates the bed with being calm and submissive. She will stay in this frame of mind when you leave.

Because our dogs want to please us, their Pack Leaders, our approval becomes the positive reinforcement they need. We just have to be clear and consistent with what we want. Creating rules, boundaries, and limitations and enforcing them provides that clarity and consistency for our dogs.

Dominance model is what it used to be a popular way of training in the past, now a days is considered a poor choice for dog training.

First, a relationship based on dominance is established by force or aggression to gain priority access to multiple resources, such as food, preferred resting spots, and mates.,Therefore, a dominance-submission model is irrelevant for most of the behaviors that people want from their dogs, such as coming when called or walking calmly on a leash.

A dog that fails to consistently perform desired behaviors is not trying to gain a higher rank; that is, its undesirable behaviors are not motivated by the desire to become dominant in a relationship. Consequently, the use of aggression and the dominance theory to address these misbehavior is inappropriate.

Thus people who rely on dominance to train their dogs may need to regularly threaten them with aggressive displays or repeatedly use physical force. It is important to be aware that even when an individual can clearly establish dominance over another, in many species, a dominant rank within a group is often relatively short lived, typically lasting only several years or through one breeding season. High rank is repeatedly tested and can be maintained only as long as the top-ranking individual is physically strong enough to win the aggressive encounters. Thus people may not be able to retain their rank.

In a family, children and elderly people can rarely establish high rank through force and are especially at risk of being injured if they attempt to do so.

Fourth, humans seek more than just priority access to resources when they are present to defend them; humans seek leadership—the ability to influence their pets to perform behaviors that they would not necessarily perform otherwise. For instance, people may want their pets to consistently come when called, to remain lying down when commanded to do so from across the room, or to stop barking at squirrels or startling sounds in the house. Humans can sometimes gain leadership through force but can also do so by rewarding desirable behavior. In relationships between dogs, dominance is usually the only way to obtain a high rank, whereas humans have a choice in their relationships with dogs.

Updated methods of establishing leadership rely on controlling all the resources that motivate the pet and using them to reward the pet for appropriate behavior. There are variations of this method, which has been called nothing in life is free, no free lunch, or the learn-to-earn program. This method stresses rewarding desirable behaviors and removing the rewards for bad behaviors. For instance, the dog can first be taught to sit and look at the owner for treats (i.e., kibble from its daily amount of food). When the dog is hungry, the owner should stand completely still with food hidden in his or her hand and wait for the dog to sit; the owner should not use a verbal cue or hand signal or touch the dog. When the dog sits, the owner should immediately give it the treat. Once the dog understands that it must choose to sit to receive a treat, the dog should be required to sit and stay to earn its daily food allowance and when it wants to be petted, go outside, or play fetch. By requiring this behavior, the owner teaches the dog self-control and to look to the owner for permission to access a desired resource. There is not a battle of wills between the dog and owner. Instead, the dog is taught a new way to receive all the resources that it used to take freely and that inappropriate behaviors are not rewarded.

Once the owner has decided on the rules, he or she must communicate them to the dog by immediately (i.e., within 1 second) reinforcing correct behaviors as they occur. In addition, the owner must prevent the dog from receiving rewards for undesirable behaviors. For instance, when dogs want to be petted, they frequently jump on their owners rather than sit calmly and look at their owners. When a dog jumps on its owner, the owner must deny it attention by holding completely still or turning his or her back to the dog and then standing still, so it is clear to the dog that it is not receiving attention. Once the dog sits, the owner must immediately, and then intermittently, reward it so that it learns to remain seated. If the owner pets the sitting dog and it stands, the owner must immediately remove attention from the dog to avoid unintentionally rewarding it for excited, uncontrolled behavior.

If the owner sits on the floor and allows the dog on his or her lap without requiring that it first sit and wait for a cue, the owner is rewarding uncontrolled behavior. The dog must earn attention by sitting calmly every time it wants attention. The owner must consistently reward appropriate behaviors until they become habits. 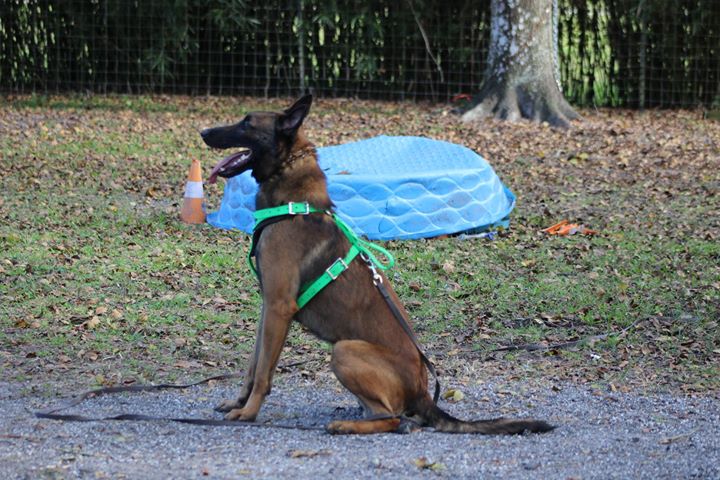 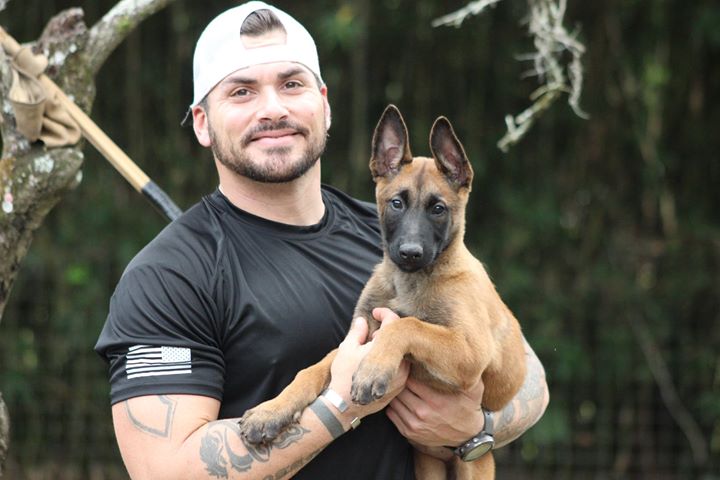 Leadership is established when the owner can set clear limits for the dog's behavior and can effectively communicate the rules by always rewarding correct behaviors as they occur while preventing or immediately removing the rewards for undesirable behaviors before they are accidentally reinforced. The owner must reward the desired behaviors frequently enough that they become habits. When owners can meet these criteria, their dogs will consider them to be predictable, dependable, and trustworthy. Rather than complying out of fear, dogs can choose to follow human direction because doing so leads to rewards. This model reflects a good understanding of the underlying cause of improper canine behavior and can lead to a strong dog-owner bond.

SET YOUR DOG UP FOR SUCCESS!

Signs That Show Your Dog Respects You

Benefits of Obedience Training for our Dogs